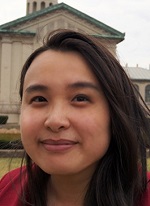 
June Zhang started as an Assistant Professor in the Electrical Engineering Dept. at the University of Hawaii-Manoa in Jan. 2017. She previously was an ORISE (Oak Ridge Institute for Science and Education) postdoctoral fellow in the Division of Viral Hepatitis at CDC (Centers for Disease Control and Prevention).

She was a recipient of the Georgia Hope Scholarship, NSF (National Science Foundation) Graduate Research Fellowship, and the Microsoft Azure Research Award from 2015-2016. Her research interests are graph signal processing, network science, data science, bioinformatics, and human-computer interaction. In particular, she is interested in understanding how adaptations and interactions amongst individuals affect the behaviors of large-scale systems.